With almost 35 years of experience as an Art Director / Designer, I can say that there is more than enough design, marketing and communication knowledge available. In 1985 I started as a decorator. Drawing, painting and hand-cutting letters from foil were the order of the day. In that period I was offered the opportunity to master various graphic disciplines, such as offset printing, screen printing and airbrushing.

With the purchase of an Apple computer in early 1986, the turn from analog to digital began. In 1990, pioneering and testing without a helpdesk led to a job change to Studio Grafitech. They were the main importer of, among others, Apple – Adobe – Radius for Europe.

I was part of the studio where not only customers could have their digital layout taken care of for the first time, but also of the research team. For example, I helped with the well-known WYSIWYG phenomenon and the realization of RGB screen colors to CMYK print / print colors. After working there for 3 years as a designer / dtp-er / developer, I got the opportunity to continue the studio part independently with my colleague. This happened on April 1, 1993 under the name OPUS II concept & design. In the meantime I had completed the post-academic Art Direction course at the Art Academy.

In 1997 I started to form a new creative team (under the name Omnus) in a self-set up communication house in Baarn. A collective business building with a.o. web designer – print broker – lithographer – animator – photographer – dtp-ers.

After a very successful but also turbulent period, from 2005 I started to be part of several creative teams (alternating).

In 2004 I came up with the idea to design a chair that would be very similar to the most famous Dutch flower, the tulip. Since then I have increasingly developed my skills in product and furniture design … and with success. For my products (Tulpi-Seat, Tulpi-Bin, Tulpi-Arabesque) I received the GIO Award, the Bronz, Silver and Golden A’Design Award, the Silver and Golden IDA Award and also the APCD * IDA Excellent Award. A retrospective of my work can be viewed in the Cube Design Museum in Kerkrade. 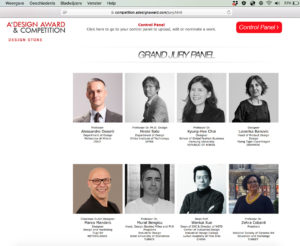 Because of my extensive knowledge about design, I have been invited to be part of the A ‘Award jury